This large, landlocked country in southern Africa has natural attractions that rival any continental competitor. The sheer size and remoteness of Zambia’s vast network of national parks mean no safari jeep traffic jams, very personal service and an opportunity to meet massive mammals eye-to-eye. And despite its buzzing and rapidly modernising centre, history and traditions remain very much alive.

1. Walking safaris
Hoofing it into the bush is the focus of tourism in eastern Zambia’s South Luangwa National Park and other reserves. A legacy of Zambia’s pioneering conservationists, ambling through lush grass or dusty sandbanks on the trail of a pride of lions is a thrilling experience. And even if you don’t see the animals themselves, the guides or rifle-carrying scouts will explain how much is revealed by the animal scat and paw prints. TV detectives have nothing on these guys. 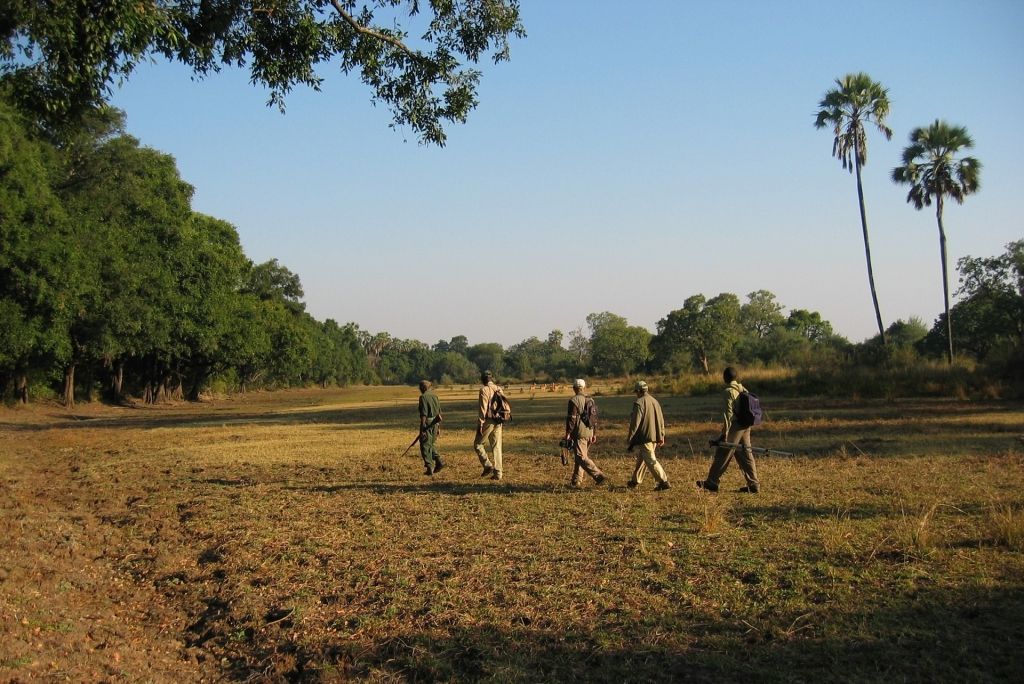 2. Canoeing the Zambezi
Get up close and personal with sunbathing crocs, thirsty elephants and hippo pods on a leisurely paddle along the lower Zambezi River. With Zimbabwe’s sandy shores on one side, a 1200m-high escarpment creating a rift valley on the other, and a continually shifting landscape of midstream islands, there’s hardly an un-picturesque direction to turn. Trips are generally upwards of two nights, but with a bit of preplanning and strong triceps you can spend a week sleeping in wilderness camps all the way downstream to the dramatically beautiful Mpata Gorge.

3. Bushcamping
Something of a misnomer and far from roughing it, the bushcamps in Zambia’s national parks will fulfil any Out of Africa safari fantasies. Ranging from uberstylish chalets primed for a Vogue photo shoot to more rustic bamboo and thatch affairs, bushcamps tend to be remotely situated and intimate, with no more than half a dozen rooms. Sitting down to a candlelit dinner of expertly prepared haute cuisine with the rustling of a curious hippo nearby is an unforgettable experience.

4. Victoria Falls
Victoria Falls is the largest waterfall on the planet – one million litres plunges down the Zambezi gorge every second – and a trip to Zambia would not be complete without visiting this sublime natural wonder. Livingstone, on the Zambian side, is now a tourism mecca catering to backpackers and luxury-seekers alike, and adventure seekers can choose from a menu of options to get their hearts pumping including a bridge bungee jump, ‘swing’ and ‘slide’, whitewater rafting, abseiling and riverboarding. If you’re after something gentler, an easy walk from the park entrance brings you close enough to be awed by the thunder and soaking spray of the falls. 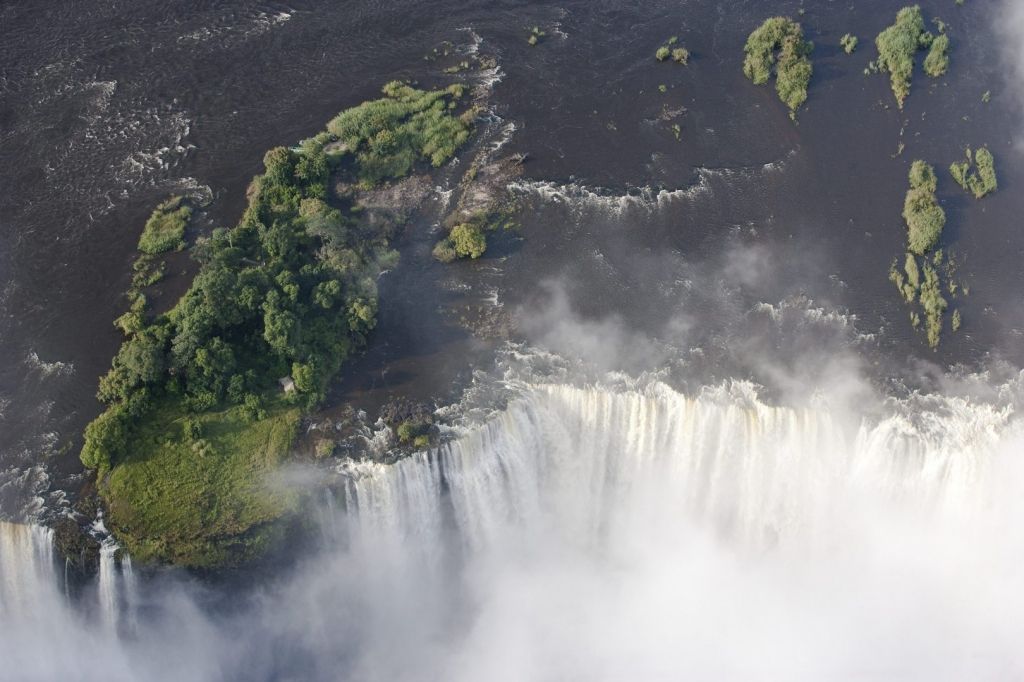 Livingstone Island is the only accesible land right on the edge of the Victoria Falls and only from Zambia. Image by Tongabezi.

5. Rare species & migrations
After the de riguer mammals are ticked off your checklist, Zambia’s rare species and migrations are sure to excite even the most jaded safari-goer. In Kasanka National Park in the northeast, eight million fruit bats darken the sky in November and December, and sitatungas, a semi-aquatic and highly elusive antelope, are commonly spotted. Nearby in the Bangweulu wetlands, herds of thousands of black lechwe roam; this is the only place in Africa you can see the antelope in large numbers. In November, tens of thousands of blue wildebeest gather on the plains of Liuwa Plain National Park, and in Kafue National Park lions can be seen swimming in swamps and even climbing sycamore trees. In both of these parks you also have a chance to see wild dogs, a hard to spot carnivore endangered throughout Africa.

6. A vital tradition
The Kuomboka, celebrated by the Lozi people of western Zambia, marks the ceremonial journey of the Litunga (the Lozi king) from his summer capital in the flood plains to his winter residence on higher ground. Far from a dull procession, the spectacle involves a huge wooden canoe (really a barge), massive war drums and around 100 paddlers wearing headdresses featuring a piece of lion’s mane and skirts made from animals skins. Though the dates aren’t fixed, the Kuomboka usually takes place in late March or early April.

7. Remains of the colonial
Something of a surprising sight – a grand manor house more suited to the English countryside – Shiwa Ng’andu shimmers like an oasis in the northeast of the country. Built by an ambitious British colonial officer and revitalised by his grandchildren, the estate includes a working farm and surrounding community, plus manicured gardens and grounds where wildlife roam. Guided tours reveal Shiwa’s fascinating history, as well as its evolving present. Guests can stay overnight in the manor house and be transported back to the Edwardian era – in the African bush. 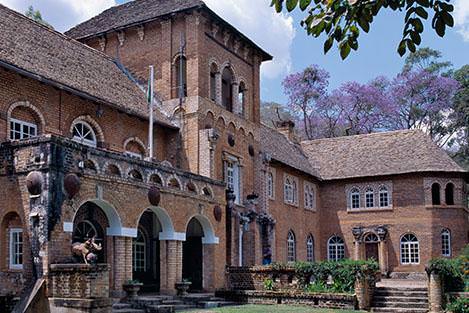 A taste of the Edwardian in Africa – Shiwa Ng’andu. Image by Nigel Pavitt/Getty Images.

8. Remote wilderness
The upside to Zambia’s rough roads and long distances is that self-sufficient, adventurous travellers are rewarded with landscapes all to themselves. Highways leaving the capital, Lusaka, branch out to eight bordering countries, and turnoffs on dirt tracks lead to small villages and dense woodland. Lake Tanganyika, North Luangwa National Park or Ngonye Falls in the southeast are all worthy destinations for a wilderness adventure. Of course if money is no object, simply charter a plane and fly…

9. Night-time in the bush
No TVs, limited electricity and early morning wake up calls mean nights on safari in Zambia are blessedly different to those back home. When the sun sets you’ll still be out in the Land Rover, the swivelling searchlight scanning the horizon and reflecting off the eyes of scurrying civets, genets and other nocturnal animals. Evening entertainment consists of fireside drinks and stories of your leopard sighting. And not to be missed is ‘fly camping’ – hiking miles into the bush and picking a spot to sleep with only a jerry-rigged mosquito net separating you from the crystal clear night sky. 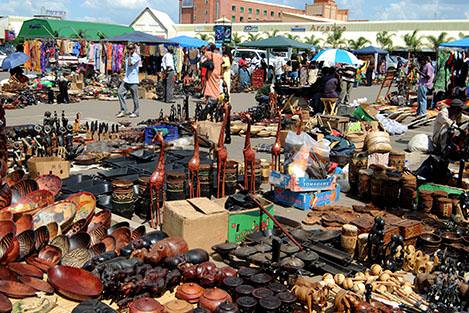 Wares for sale in a Lusaka outdoor market. Image by Tom Cockrem/Getty Images.

Zambia’s capital of Lusaka deserves to be more than simply a pit stop or way station between national parks – its modernity and cosmopolitan mix of people offer a window to understanding the country as a whole. The city’s young and stylish hit the happening restaurants and clubs, many of which are in and around Manda Hill and Arcades Shopping Centre. While admittedly overwhelming to the senses, the city’s outdoor markets are worth experiencing to see how ordinary Lusakans do their everyday shopping. Design House Café, on the outskirts of the capital, has an idyllic garden setting and breakfast or lunch here is worth every kwacha of the taxi ride.