A World in One Country

Since the first democratic elections in 1994, South Africa has become a top travel destination. It has one of the world’s most diverse tourist offerings, with attractions ranging from wilderness areas and contrasting landscapes to modern cities – blending ‘authentic Africa’ with modernity. Hence, South Africa has often been described as ‘A World in One Country’.

Bounded by oceans on three sides, the country has Africa’s longest coastline and superb vistas. Enjoy the tropical, sandy beaches of the Indian Ocean, the sheer, forest-covered cliffs of the Atlantic coastline and amazing marine life encounters from southern right whales to pristine coral reefs. Snow-capped mountains are contrasting with the arid deserts and red sand dunes of Kgalagadi in the heart of the country. Cape Town is famed for the majestic Table Mountain – one of the Seven Natural Wonders of the World – and Stellenbosch is well known for its surrounding scenic winelands and excellent wine. The dramatic spring wildflower display of Namaqualand and the windswept moorlands and crags of the uKhahlamba-Drakenberg are as fascinating as the acacia-studded savannah of the Kruger. Kruger National Park itself is a world famous premier wildlife and bird viewing destination, being home to the Big 5.

So, a World in One Country? Needless to say, no single country ever could be. But South Africa truly is a country of inspirational variety – in terms of fascinating wildlife, a stunning range of landscapes and a unique blend of cultures.

Kruger National Park stretches over 500km from north to south. It hosts a rhino population larger than every other country in the world and is home to the Big 5 of Africa (lion, leopard, buffalo, elephant and rhino). Adjacent private reserves, e.g. Sabi Sands and MalaMala, are celebrated among travellers for their extremely good chance to spot the Big 5 when staying a couple of nights. Cheetah, giraffe, warthog and many types of antelopes are also among the dwellers in Kruger. South Africa further harbours more endemic and near-endemic birds than anywhere else in Africa, making it a favoured destination for birdwatchers. However, the country’s flora is in no way inferior to its fauna. Thanks to its high level of endemism, South Africa has been ranked the world’s third most important country in terms of biodiversity. The tiny Cape Floral Kingdom alone is home to many plants that cannot be found anywhere else.

Likewise, this diversity is echoed in South Africa’s peoples and history – a unique cultural blend of indigenous, European and Asian influences. A thousand years ago, the first settlers – the San or Bushmen – and the Mapungubwe and Thulamela, already merchandised with Arab and Chinese traders. The outcome is a 21st century country full of ethnic diversity and home to cultures rich in tribal traditions, European customs as well as Indian and Malay influences in music, dance and cuisine – a delight to explore in all its many forms. Experience the limestone caverns of the Cradle of Humankind near Johannesburg, visit traditional Zulu and Ndebele cultural villages and marvel at prehistoric rock art of the uKahlamba-Drakensberg Mountains. Discover the city of Johannesburg, Africa’s most important economic powerhouse, and stately Cape Town, said to be one of the world’s most beautiful cities.

The immense progress made as a unified nation since 1994, plays a very significant role in South Africa’s historical development. Decades of oppressive and racially divisive apartheid rule came to an end when Nelson Mandela and the ANC won the first democratic election in the 90ies. Explore Johannesburg’s Apartheid Museum or Cape Town’s District Six Museum to understand the iniquities of the country’s recent past as well as its subsequent achievements in perspective.

South Africa is a very affordable travel destination: The Rand has a beneficial exchange rate, the cost of living is low and its first world infrastructure makes travelling easy and ideal for self-driving. Combined with the country’s natural beauty, the temptation of the bush and its wildlife as well as the comfortable climate all year round, South Africa is the ideal place for well-priced first time safaris and city trips. 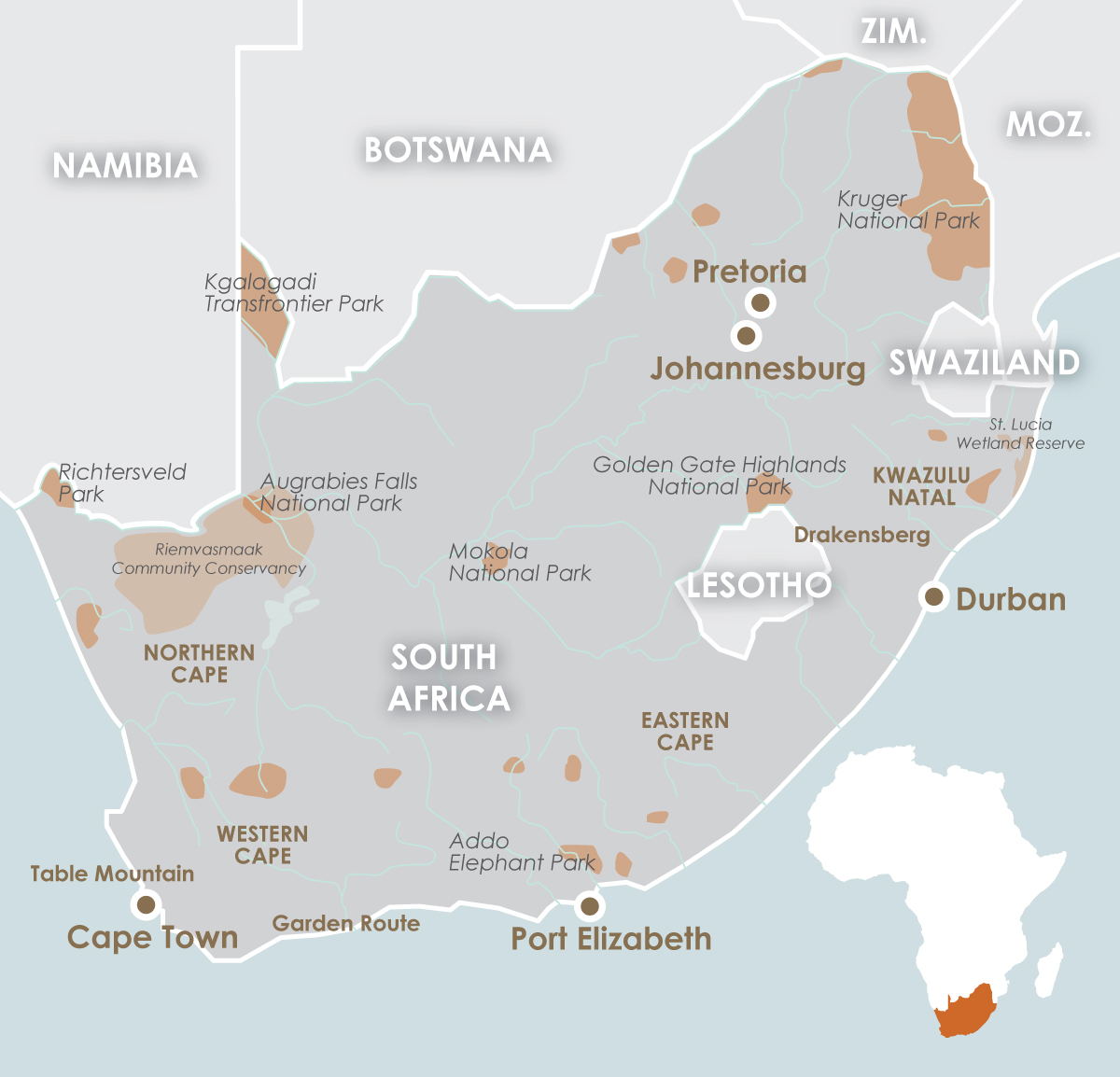